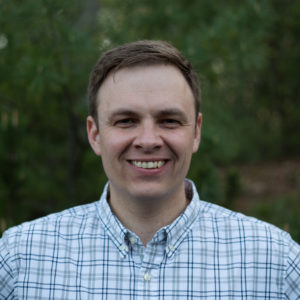 John became the pastor of Christ’s Church in October of 2016. He grew up in Nebraska and gave his life to Jesus when he was eighteen. In college John served alongside the Navigators and developed a passion for Bible study and disciple making. He holds a bachelor’s degree in secondary education (English and history) from the University of Nebraska at Kearney and a Masters in Theology from Dallas Theological Seminary where he focused on the study of the New Testament in its original language.

John’s life mission is “to know Christ and to make him known.” He loves to study the Bible and create learning opportunities for other people to know Jesus better through it.

When the New England leaves are turning in the fall, you might find John studying his Nebraska Cornhuskers on Saturdays. John loves to hike, bike and be in nature. He has a knack for traveling light and loves exploring beautiful areas of the country. He has been known to pull a quarter or two out of the ears of unsuspecting children.

John resides in Merrimack with his lovely wife, Amy, his daughter Leah and sons Sam and Ian.